The mansion at 105 Brookschase Lane in Windsor on the James is listed for sale at $4.2 million. (Photos courtesy of CVRMLS)

Richmond’s high-end home market heated up in recent weeks with the addition of three multimillion-dollar listings along the north side of the river.

Priciest and largest among them is 105 Brookschase Lane, a 12,500-square-foot mansion in Henrico’s Windsor on the James neighborhood that hit the market for $4.2 million.

A few doors down the street, the 8,400-square-foot house at 125 Brookschase Lane was listed this month at $2.4 million. 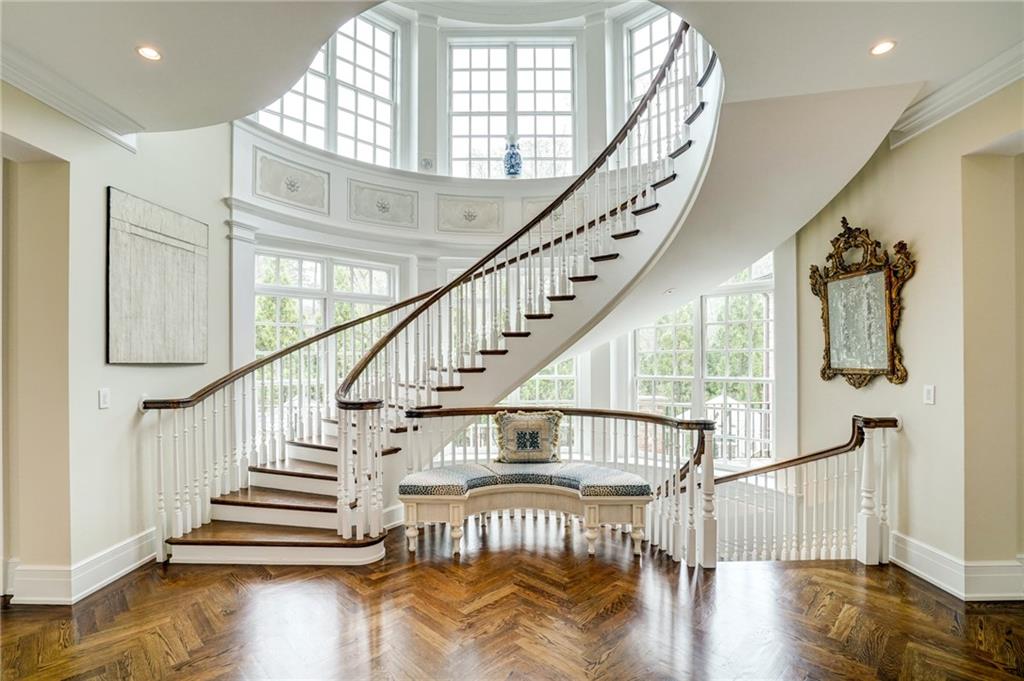 And downriver in Windsor Farms, the 9,300-square-foot house at 332 Clovelley Road hit the market for the first time in 54 years with an asking price of $3 million.

All three listings are being handled by principals with Shaheen, Ruth, Martin & Fonville Real Estate. Scott Ruth and Scott Shaheen have the 105 Brookschase and 332 Clovelley listings, while John Martin and wife Holly Martin co-listed 125 Brookschase.

105 Brookschase hit the market March 22. The seller is a trustee for Doris Nelson, who bought the house in 2004 for $359,000, according to Henrico property records. Ownership was transferred to the trust in 2015. 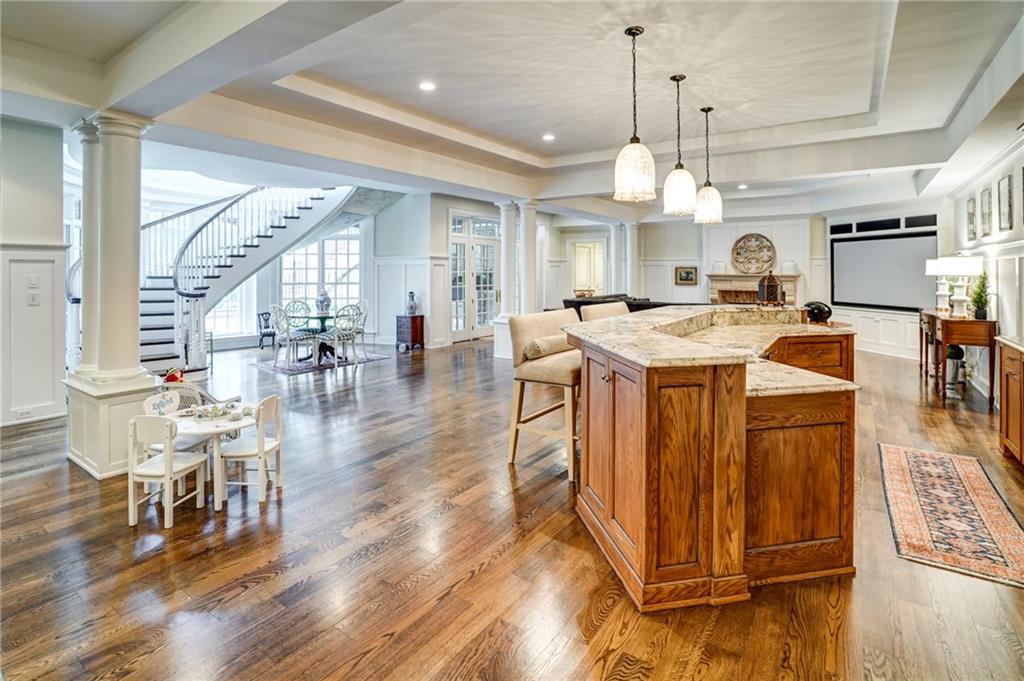 The lower level has a walkout basement with a bar.

The county most recently assessed the 1-acre property at $2.8 million.

Totaling five bedrooms with six bathrooms and three half-baths, the three-level brick colonial was built in 2011 by Rick Kastelberg with Mako Builders. The house includes a sunroom with fireplace, walkout basement with rec room and fireplace, an elevator and a four-car garage.

A pool highlights the landscaped grounds that include raised terraces and a covered outdoor space off the basement. 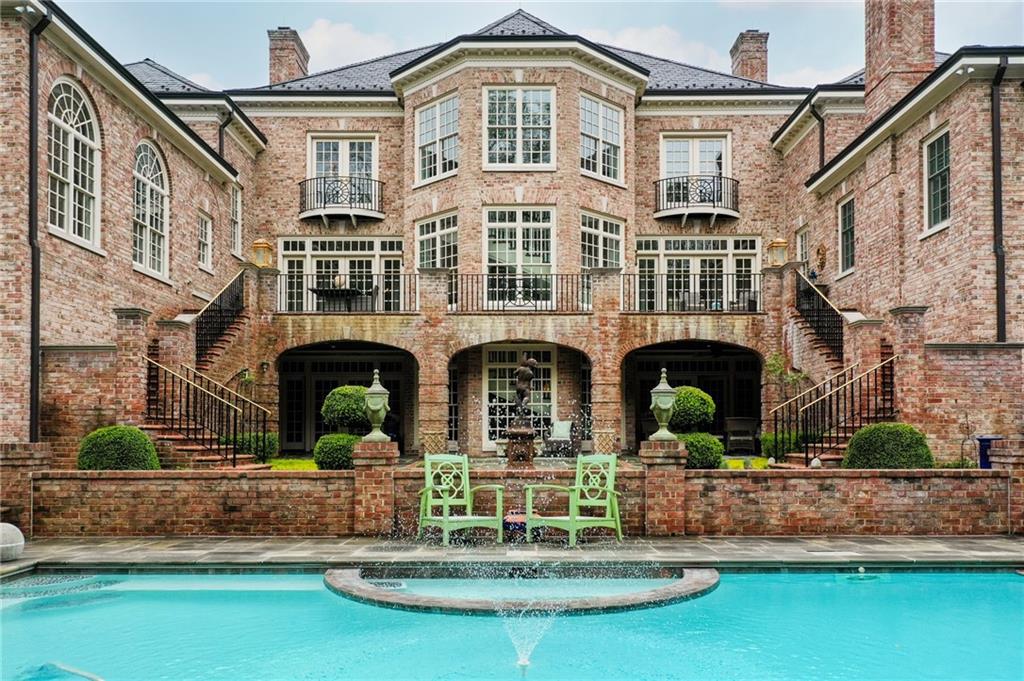 A pool highlights the rear of the house.

“It’s done top-to-bottom exquisitely,” Shaheen said of the house. “Every detail was handpicked by the seller. It’s just a knockout home.”

Down the street, 125 Brookschase totals six bedrooms, five bathrooms and four half-baths. It was entered into the Central Virginia Regional Multiple Listing Service on April 5. 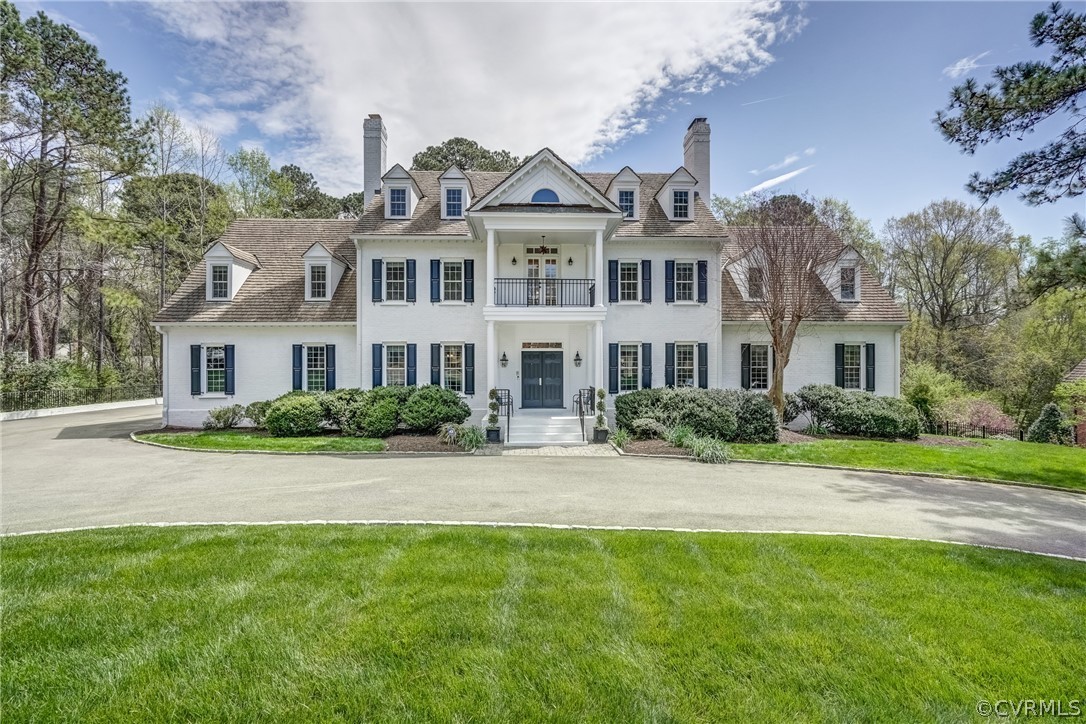 The house at 125 Brookschase Lane is listed at $2.4 million.

Property records list the owners as Jon and Cara Marks, a pediatrician and emergency care physician, respectively. They bought the house in 2012 for $900,000. The county has assessed the 1-acre property at $1.6 million.

Built in 1992, the 2½-story colonial includes two primary suites with fireplaces on the first and second floor, an elevator, two-story foyer, a study and sunroom. All bathrooms have been renovated, and the walkout basement has a rec room, exercise or movie room and another of the home’s seven fireplaces. 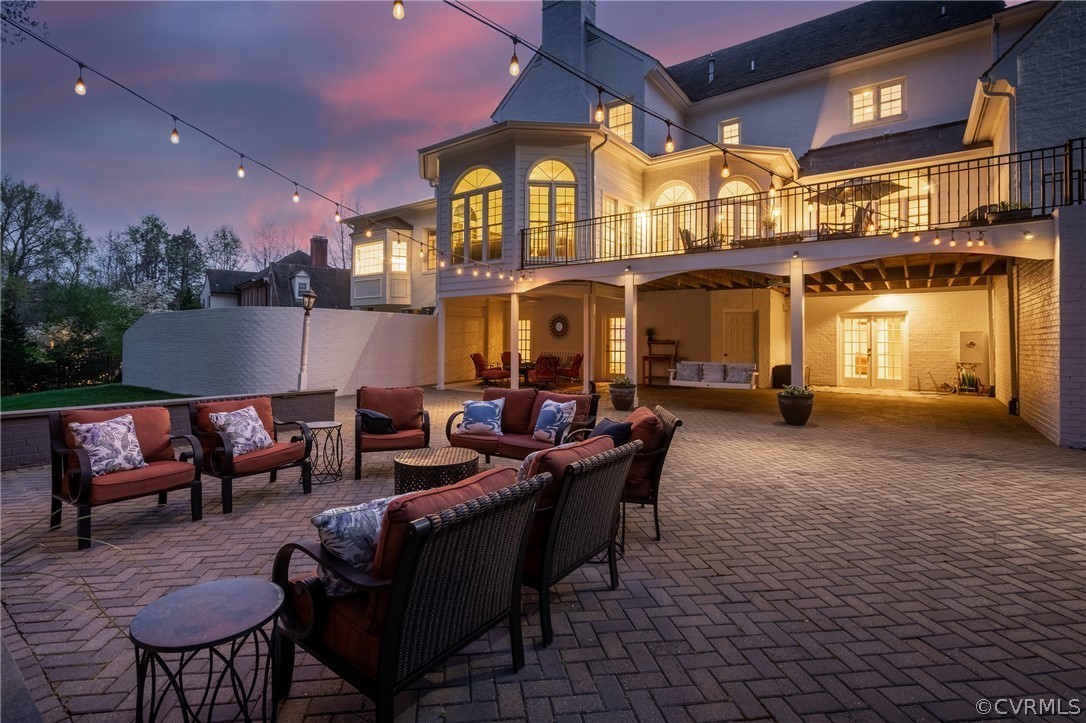 The rear of the 125 Brookschase house features a terrace with fireplace.

The two Brookschase listings share the same street with 216 Brookschase, a 7,200-square-foot colonial that was February’s second-priciest sale at $2.1 million. John Martin was a co-listing agent on that deal, representing seller Bob Porter Jr. of Porter Realty.

In Windsor Farms, 332 Clovelly is owned by an LLC tied to Lois Schroeder, who owned the house with her late husband, Louis Clifford (“Cliff”) Schroeder, who died in 2020. City property records list the LLC’s address as a nearby residence that’s in a trust for Lois Schroeder. 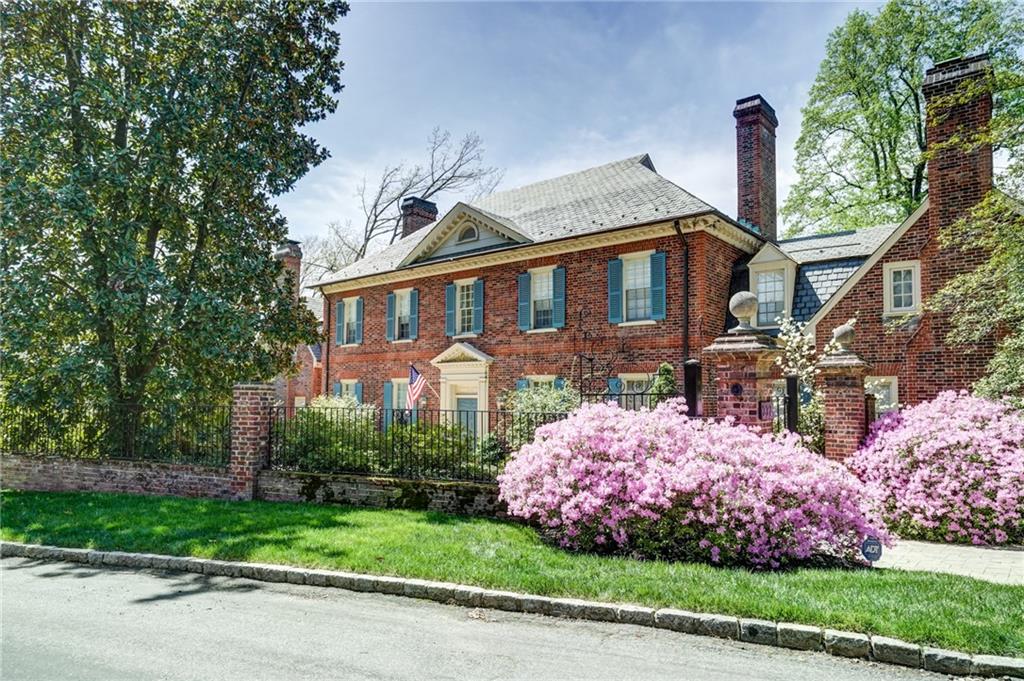 The house at 332 Clovelley Road in Windsor Farms is on the market for the first time in 54 years.

Cliff Schroeder was an owner and CEO of Richmond-based Dixie Container Corp., according to an obituary. He was also an executive with Delos Realty Corp., which Lois has served as president.

The couple had owned the house since 1968, when they bought it on Valentine’s Day for $130,000, according to property records. The city most recently assessed the property at $2 million.

Totaling five upstairs bedrooms and 6½ bathrooms, the three-level Georgian was built in 1941 and is situated on a 2.7-acre lot overlooking the river. It has a front-to-back foyer, library, sunroom, walkout basement with rec room and six fireplaces. The property includes a 50-by-25-foot pool, Charles Gillette-designed gardens, brick paths and decorative iron gates. 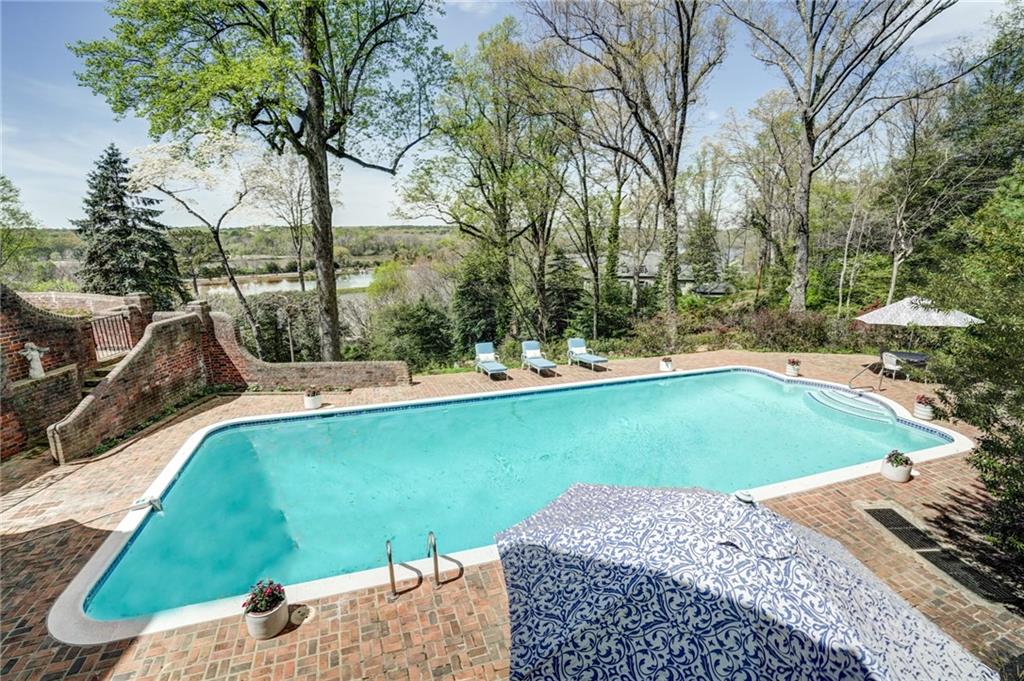 The Clovelley house’s pool with views of the river.

Shaheen said showings for the house started this week after a “coming soon” period that started April 4. He said interest so far has been primarily local and they’re marketing the listing via the national Who’s Who in Luxury Real Estate network, as well as through boosted posts on social media platforms.

“It’s the first time on the market in 50-some years. The river views are beautiful. It’s got a gorgeous pool,” he said. “The landscaping, the Gillette gardens, everybody’s been commenting on how beautiful it is. It’s got terrific molding, 11-foot ceilings on the first floor and fireplaces galore. It’s a true stately home.”

332 Clovelly joins another Windsor Farms listing priced in the $3 million range. The 10,000-square-foot home of former Dominion Energy chairman and CEO Thomas Capps remains on the market at $3.8 million, reduced from its initial listing in 2020 at $4.5 million.