Back in 2015, author and journalist Chike Frankie Edozien was looking to move from a Brooklyn rental to a permanent home that he and his partner could own. “We both have large families and needed a place with room for everyone,” says Edozien. After searching through the more affordable fringes of Brooklyn and Manhattan, Edozien turned to The Bronx.

Although New York City’s northernmost borough hadn’t initially been on his radar, Edozien was able to find a home that met both his “wish list” and budget. “I wanted proximity to a park, easy access to a library and a nearby subway station,” he says. Nearly three years after beginning his search, Edozien closed on a three-bedroom duplex house close to St Mary’s Park priced, he says, between $500,000 and $600,000.

Best known for landmarks such as Yankee Stadium and the Art Deco-rich Grand Concourse, the southern Bronx has recently emerged as the busiest new building site in New York City. Along its Harlem River shoreline — directly across from Harlem itself — thousands of new homes are coming to market aimed at the affluent professionals typically found in Manhattan or Brooklyn.

Most of the units are rentals and set in shiny tower complexes close to key transport hubs. They’re a far cry from the low-slung brick and stucco apartment buildings that typify what is still one of New York’s poorest neighbourhoods. They’re also far costlier: rents at Third at Bankside development range from $2,900 a month for a studio to $5,000 for a two-bedroom — a massive stretch in a neighbourhoods such as Mott Haven, where the average rent was $1,000 a month a couple of years ago.

The developments are ‘obscene . . . completely inaccessible and unaffordable for our community’

The new arrivals have been met with a mixed reaction. Activists, such as Arif Ullah, executive director of South Bronx Unite, describe the luxury influx as “obscene . . . completely inaccessible and completely unaffordable for our community”.

Real estate appraiser Jonathan Miller views the upmarket building as almost inevitable. “The South Bronx is a perfect example of ‘neighbourhood creep,’” he says. “Markets creep and expand as they become less affordable [ . . . ] After Manhattan people moved on to Brooklyn and then Queens and now it’s The Bronx’s turn.”

The scope and scale of the new development is remarkable. Take Bronx Point: hugging the Harlem River, the half a million sq ft scheme includes 1,100 rental units, a 2.8-acre park and the soon-to-open Universal Hip-Hop Museum. Then there’s Bankside, from global mega-developer Brookfield, which will offer 1,350 rentals in seven towers also along the water.

In total, some 20 new developments are planned for the South Bronx area — bringing upwards of 5,000 new units and a potentially dramatic shift in the South Bronx’s demographics.

Community has always had special meaning in the southern Bronx. Two generations back, the area — most notably along the Grand Concourse — was predominantly Jewish, birthplace of quintessential New York types such as Calvin Klein and Ralph Lauren. Later, Puerto Ricans arrived — many, as made famous in West Side Story, expelled from gentrifying parts of Manhattan — followed most recently by immigrants from West Africa. The area is also heavily African-American.

Without doubt the southern Bronx is vibrant and tight-knit — a new Children’s Museum will soon open, the venerable Bronx Museum of the Arts recently celebrated its 50th anniversary, and the area was chosen by noted artist Charlie Hewitt as the debut New York City site for his public art installations, the Hopeful Project.

Developers are quick to note that most new projects include “affordable” units typically aimed at less affluent locals. But with affordable studios at Bankside beginning at $1,795 a month, “you do the math”, Ullah says. “These developments change the character of a neighbourhood, shutting down and suffocating lower-income residents.”

They also lure “flipper” and investor buyers more interested in potential profits than laying down permanent roots. “Almost all of my neighbours have been approached by someone looking to buy their home,” says Edozien. 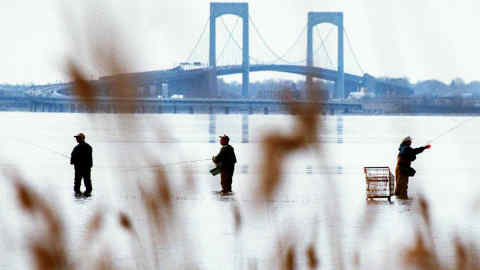 Although nearly all of the new developments are rentals aimed at high earners, developer Origin North is taking a different approach. Over the past 18 months, the company purchased and renovated a portfolio of apartment blocks mostly across The Bronx — including its southern reaches — which are now being sold as co-ops. Priced from $140,000 for a 542-sq ft studio, buyers can qualify for ownership with a minimum 3 per cent downpayment.

“We are mostly appealing to first-time buyers who wouldn’t pass traditional co-op boards,” says Origin North chief investment officer Rachel Brill. “Most of our buyers are coming from The Bronx.”

Julius Tanner, for instance, a 27-year-old Bronx schoolteacher who had been living with his family just outside of the city, put down a mere $13,000 for a 990 sq-ft one-bedroom apartment priced at $265,000 and located just 30 minutes from his workplace. “It’s been a bit of a culture shock finally leaving home,” Stanner says. “But this was exactly the opportunity I’d been saving for.”

A one-bedroom/one-bathroom co-op in the Fordham Heights area of The Bronx with hardwood floors and new eat-in kitchen: $190,000

A two-bedroom/two-bathroom rental at the Third at Bankside development with a small, separate den and walk-in closet: $4,192/month